A Tribute to our Heroes 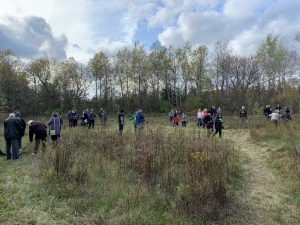 On October 24th, 2021, Oak Ridges Moraine Land Trust welcomed friends and family to honour some of our Nature Heroes who have passed away in recent years. It was a warm and sunny day to honour these amazing people by planting native oak and maple trees on our private MapleCross Nature Reserve in King, ON.

“Our Environmental Champions have made contributions that will continue forever with the Oak Ridges Moraine Land Trust. As the current CEO, I am honoured to continue their legacies.” – Susan Walmer, CEO of ORMLT 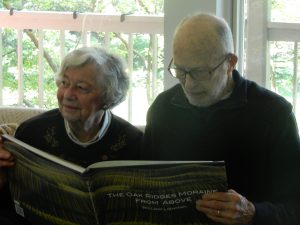 As our founding board member and Chair of the Oak Ridges Moraine Land Trust, Tom helped to establish and guide our organization as we began the protection of lands across the Moraine. Tom had an amazing capacity to get things done and humbly crediting others for the great achievements and milestones over the years. He said he that he stayed young by hiking 20kms a day. Tom was a Board Member of the Oak Ridges Trail Association, a tireless fundraiser, volunteer and auction organizer on the Charles Sauriol Environmental Dinner Committee.

“ I can still see Tom’s quick step and long stride as we toured a new (protected) property. Although Tom was usually the oldest Director, he left most of us trailing behind him. His love of the land was contagious, and he put a spring in all our steps.”
– Mary Dube ORMLT Board Member, 2001-Current

“Jane was an inspirational and courageous champion for many causes, most particularly for the livability of her beloved King Township and the protection of the Oak Ridges Moraine and Ontario Greenbelt. No fight was too daunting, including the “Big Pipe”, which led her to found Preserve the Village. Numerous environmental issues were taken up through her work with the King Environmental group, and the saving of the blue heron rookery brought particular pleasure. She served multiple terms as a King Councillor, narrowly missing out on the mayor’s chair, devoting herself to her constituents throughout. Her vision and dedication were profoundly felt by, among others, the Concerned Citizens of King Township, the Heritage Advisory Committee, the Seniors Centre and the Trails Committee. Jane’s tireless service in and outside of office was recognized with many awards, including the Moraine Hero and municipal Lifetime Achievement Award. She brought equal passion to all her interests.”- Debbie Schaefer, Township of King Councillor 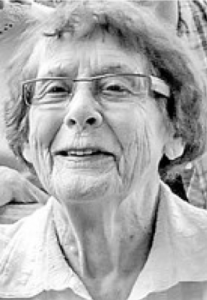 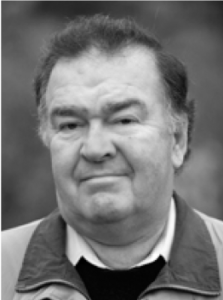 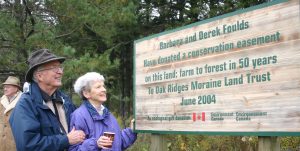 Derek and Barbara Foulds bought their land in Uxbridge with rolling moraine topography with steep slopes, composed of gravel, stones and sand. The elevation of their property is one of the higher points along the moraine. They started tree planting at their property over 50 years ago, planting thousands of trees with friends over the years and then donated a conservation easement to the Oak Ridges Moraine Land Trust in 2003. When CEO Susan Walmer visited Derek and Barbara Foulds in their seniors residence over the years, they chatted about how the trees they planted over the years were growing and thriving. The CEA that they placed on their property will ensure that their lands and their trees they planted, are protected forever.