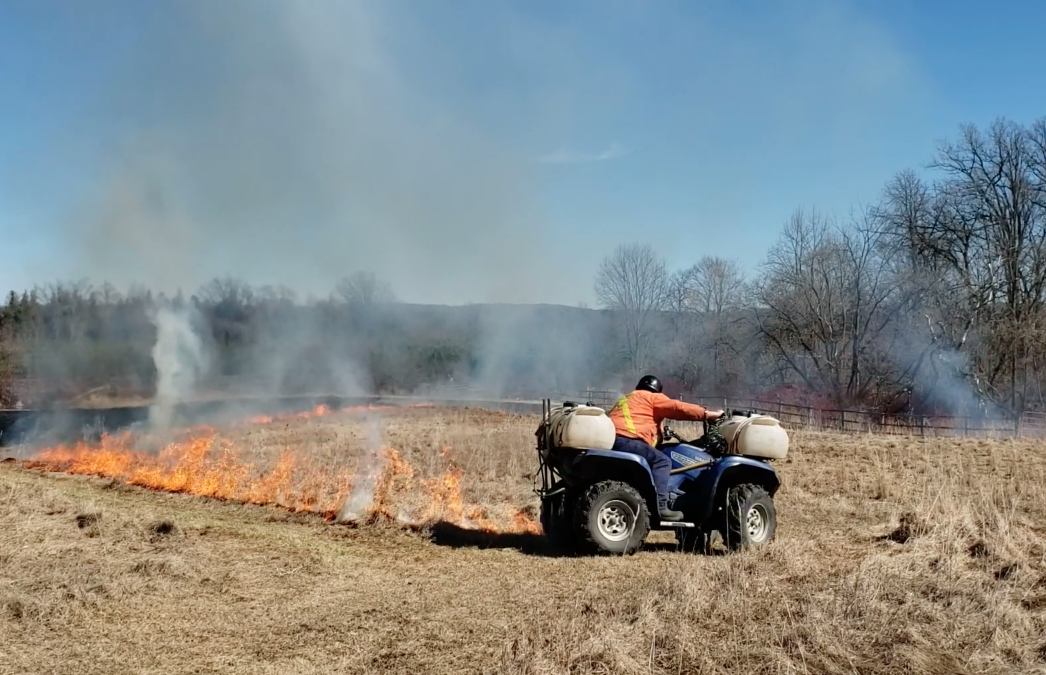 hThis property was previously used as an equestrian facility, dedicated to keeping and care of horses. Its has since undergone many projects to restore the ecological integrity of the land including planting over 10,000 White Pine and White Spruce, wetland creation and plating over 400 shrubs and deciduous trees. The last, and most important restoration project is the creation of the Tallgrass Prairie. This restoration project will further support the use of the property as a demonstration site to educate the public of roles that different ecosystems play for the species that inhabit them and in helping to combat climate change.

Grassland habitats such as Tallgrass Prairies are the most threatened habitats on the planet. Tallgrass Prairies are a rare ecosystem in Southern Ontario and on the Oak Ridges Moraine, with only remnant patches remaining. The loss of this ecosystem has led the decline of many species that rely on them. Some of these grassland-dependent bird species have resorted to nesting in hay fields. Unfortunately, the first harvest of hay usually happens during nesting season resulting in destroyed nests and dead young, making reproductive success a major threat to these already threatened species.

Perhaps one of the biggest impacts from the loss of Tallgrass Prairie ecosystems is the loss of their carbon fixing capabilities, which helps to mitigate climate change. The plants that are associated with a Tallgrass Prairie are able to sequester up to 4 tons of carbon per hectare per year. This means that the area of this project would be able to remove nearly 10 tons of carbon from the air per year!

This project will reintroduce native plant species that have been missing on the landscape for decades. Bobolink and Eastern Meadowlark are ground nesting grassland birds that have similar habitat needs. Although utilization of the habitat by these birds for breeding might not be immediate, requiring a year or so before there is a significant amount of thatch on the ground for them to nest in. However scientific and anecdotal evidence shows that species such as Bobolink and Eastern Meadowlark recognize areas where fire has been as preferred habitat and populations increase/establish in subsequent years.

The pre-COVID plan was to carry out a prescribed burn on the property in the spring of 2020. With the shutdown due to COVID-19, the fire department was unable to attend the burn, so it was postponed. This gave us an opportunity to pivot and try out three different treatments on the burn sections to see which would be most successful:

We realized while planning this burn, different professionals who we consulted with had conflicting recommendations for how to best prepare for the burn. This pivot allowed us to test out the various recommendations (treatments), within a fairly homogenous area to see which is the most successful for grassland restoration. The treatment areas will be monitored over the next few years to document results.

Based on the traditional knowledge of Indigenous people, who used controlled burns for millennia to sustainably manage the land, and the help of Wildfire Specialists Inc. on March 20, 2021, the burn was ignited!

Fire is the most natural and efficient way to destroy non-native plants and allow fire-tolerant native plants to regain a foothold. Once a natural occurrence, controlled burns were harnessed by Indigenous people as a sustainable way to work with the land. These burns were banned as part of colonialism oppression of Indigenous culture and practices.  Now, we see that this practice is essential to preserving and restoring grassland habitat. Tallgrass Prairies and their inhabitants have evolved with fire, and it is a crucial process for mitigating succession and shrub/invasive plant encroachment. Their deep roots, and delayed start in the spring are both adaptations for fires.

The fire was lit so that it travelled in an up-wind direction, allowing for any wildlife in the area to move out in a safe manner. The timing of the fire will correlate with when cool season, non-native, grasses are staring to germinate, this will allow for the plants to be destroyed by the fire. After the fire has passed over the land it leaves the ground charred and blackened, which heats the soil and encouraged the growth of desired native species. Often times after a controlled burn, prairie species such as Big Bluestem will appear where they had not been recorded before as they were lying dormant for decades, waiting for the non-natives to be removed.

Two weeks after the burn, the one area was seeded with native grassland species. A premixed seed mix was selected that contains entirely native Tallgrass Prairie species. 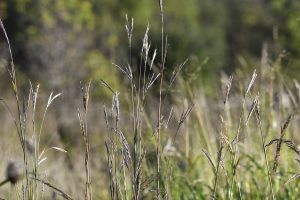 Big Bluestem (Andropogon gerardi) Some of the native grassland species that have been planted as part of this project.

The seed mix was the ideal ratio for the Eastern Meadowlark, who is more sensitive to grass to forb ratios. This species in this seed mixture will also help the federally endangered Monarch and Mottled Duskywing butterflies as this mix has Common Milkweed and New Jersey Tea, which are essential to all life stages of these butterflies.  Additional native plants will be planted on the perimeter of the areas to provide an additional seed bank for the area.

Within one month of the prescribed burn, the first recorded Eastern Meadowlark was observed on the property. Two Meadowlarks were seen later in August, one adult and one juvenile, suggesting they may have bred at the grassland restoration area! In June 2021, a Bobolink was heard for the first time ever on the property, and although there was no evidence of breeding for this species this year, its presence suggests a potential home in the future, or at minimum, a refuge for the nearby birds after the hayfields they were breeding in have been mowed. Both of our targeted species had discovered the new habitat within the first few months of the burn, showing how integral these types of restoration projects are to these Species at Risk.

The long-term success of this restoration project will be determined by the continued presence/absence of Bobolink and Eastern Meadowlark found on the property, plus the sightings any other additional Species at Risk. 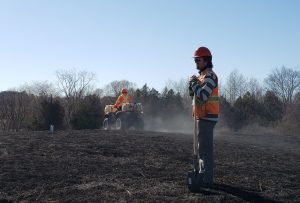 The “Burn Crew” inspecting the area after the burn, which was completed on March 20th, 2021.

Thanks to our supporters for this project!